Art by Killer Bee
About

This album acts as the B-side and companion piece to my upcoming album 'Sagrada', an album centered on spirituality within Mexican-American culture and the role it played in family dynamics and my own upbringing, but instead of looking at familial structures I wanted to see the role it played upon my perception of love. So there are similar Christian symbols and themes that I explore on it, but I juxtapose it with my own beliefs of Zen Buddhism as well as questioning organized religion and the beliefs of my parents' and their parents' who grew up within a very patriarchal society that has twisted religion/organized church into fitting their own agenda, siphoning power from the poor and the oppressed in order to benefit the few. The bullshit continues today as the lines between church and state are blurred further, eroding trust in institutions and wielding a corrupt supreme court as a weapon to strip the rights away from millions of women and child-bearing people.

This album was also made under the umbrella of what I thought would be 'Late Night Ramen 5.' I was listening to The Beatles' 'White Album' constantly, trying to capture the spontaneous and sketch-like way it was put together by writing many of these songs in a single day. So many of these songs follow this formula, but as I was making both 'Sagrada' and 'LNR_[05]', I noticed that every other song I made was about someone in particular so I thought it made more sense to compile into its own project.

So this album is about love at first sight. I wanted to investigate the role that religion played in my Mexican American upbringing and how it/my own spirituality affects the way I approach love or someone I'm interested in. I've played with the idea of deifying someone that you're in love with in my songwriting the past but I wanted to expand upon it in a tongue-in-cheek kind of way since the person this album is about's name is one letter off from the Buddhist goddess of mercy. So I make several allusions to her, comparing them and further blurring the lines between divinity and humanity. My friend Mercury asked me how religion has played a part in my upbringing in terms of how I view love so I'll paraphrase my answer below.

My parents grew up in a very conservative and patriarchal region of Mexico, where religion is intertwined in daily relationships and especially within sexual relationships. I think the ever present imagery of the Virgen de Guadalupe (she is the patron saint of the country upon appearing to Juan Diego in 1531) has played a major role in how people viewed women and how women were supposed to view themselves. They were taught to hold themselves to an impossible standard with the qualities that a saint would have: chastity, purity, fidelity, obedience (especially to men), and silence in suffering. From what I could tell growing up and visiting my family in Mexico, this standard was forced upon many women who were forced to marry or stay in marriages that were frequently abusive due to the saintly ideal of perseverance and staying faithful to the person you marry no matter what. The church shunned divorcees and the society especially so. So growing up, I would frequently meet parents who met when they were children, stayed together through high school and then eventually got married only to go on to have very strained marriages because the idea of finding your "soulmate" early and forcing two people to love/marry only one partner (chastity) was highly encouraged. Not to mention the countless soap operas, romance and charro films with actors like Jorge Negrete that emphasize and normalize all of this. Growing up absorbing and witnessing this romanticized and distorted version of love, where love at first sight happens with scenes of cowboys serenading lovers with a mariachi band, influenced the way that I view love. When I like someone, I like them 1000%. I want to shout it from the rooftops, serenade them in a mariachi outfit, etc. etc. as this toxic mindset taught me to search exclusively for soulmates, to love someone from the jump and always wear my heart on my sleeve. I also reconcile this with my Zen Buddhist beliefs, of trying to live in the present and be grateful for every moment I have here. So I think that also plays into my view on love, that every life is precious and rare. That out of trillions of stars in the galaxy, over billions of years since the big bang.. I was lucky enough to have existed in this blink of a lifetime on this speck of dust that has brought me to this person. To exist on a planet where music exists and I'm able to express my feelings in a medium outside of words because when you love someone it is something that cannot be explained. It feels cosmic, it feels divine. So seeing the divine/humanity in all of us is very important to me and I think it relates to both Zen Buddhism and Christianity (at least the direct teachings).

I drew the album cover in Photoshop and edited it so it would look like a painting. The cover depicts the Immaculate Heart of Mary (Inmaculada Corazón de Maria) and the 7 sorrows ("swords") that pierced it. The thorns are representative of the Sacred Heart of Jesus (Sagrada Corazón) and lilies of the valley represent Mary, as it's claimed they were the only things left at her grave upon her assumption. The album cover ties into the spiritual themes of the album and acts as an homeage but also subverts the typical imagery by replacing the swords (typically of European origin) with those of some of my favorite anime. I feel like it's a perfect blend of the two cultures that raised me or at least ones I've learned to love and appreciate. My Mexican American heritage and my love for Japanese culture. I poke fun at the imagery by subverting expectations as an attempt to wake certain people familiar with the image up out of their complacency, defending a church that has continued to distort its original message of love and unity for hate and division. It's easier to worship an image than to help each other, especially the homeless and the most vulnerable. The order of the swords/owner is as follows (top, clockwise): Saber (Fate Stay Night), Kirito (Sword Art Online), Sasuke (Naruto), Hitsugaya (Bleach), Meliodas (Seven Deadly Sins), Inuyasha (Inuyasha), Tommy/White Ranger (Mighty Morphin Power Rangers), Rukia (Bleach). Instead of seven sorrows, the seven swords represent the seven deadly sins, a topic I've spoken about before on my album 'DESIRE'.

I don't know if each character is supposed to represent a sin (besides Melodias as the sin of wrath which is pretty obvious lmao) but someone probably smarter than me might be able to dissect it and tie them all together. The final and most prominent sword (Saber's Excalibur) is supposed to represent the sin/virtue of desire/love with the person this album is about's hand plunging it into my heart. I like examining the non duality/dichotomy and the two sides of the coin of love and devotion. The idea that love can bring you the greatest pleasure or the greatest pain. The sword of love can often cut the deepest. The text elements and font throughout the booklet are meant to represent elements from the Art Nouveau art scene, as well as a play on a children's fairytale storybook. There is a bookcase in the studio where I make music which holds an old children's fairytale book that my parents used to read to me when I was younger and when I was stuck on lyrics I would flip through the book for inspiration. "The Green Knight" was one of these tales which subsequently inspired me to write that song, as well as many of the design elements in the booklet. So I wanted this album to sound like a fairytale, a beginning and an end to a daydream. And of course, a bunch of other things inspired it: Anime like Bakemonogatari, Horimiya, Fruits Basket, Berserk, and My Dress Up Darling. TV Shows like Star Wars Rebels, Stranger Things, Chernobyl, Venture Bros, and Aqua Teen Hunger Force. Movies like 'Drive My Car', 'Eyes Wide Shut', and 'The Batman'. Painters like David Hockney, John Valadez, and Hiroshi Nagai. Albums like 'House of Sugar' by Alex G, 'Dragon New Warm Mountain I Believe In You' by Big Thief, 'Weatherglow' by Asian Glow & Weatherady, 'Let It Be', 'Sgt. Pepper's Lonely Hearts Club Band' and the 'White Album' by The Beatles, and 'Pet Sounds' by The Beach Boys. Authors like Ntozake Shange and Michel Foucault. Teachers like Ram Dass, Michael Parenti, Jiddu Krishnamurti, and Alan Watts. Genres like indie folk, indie rock, emo, shoegaze, dream pop, dreamgaze, bedroom pop, indietronica, electronic, UKG, jungle, skate punk, R&B, chamber pop, and more. Religions like Christianity, Hinduism, and Zen Buddhism. Artists like Alex G, Phoebe Bridgers, The Beatles, The Beach Boys, Frank Ocean, Soccer Mommy, Teen Daze, Tigers Jaw, Jyocho, Teezo Touchdown, Clairo, Kendrick Lamar, Doss, SOPHIE, umru, Kacey Musgraves, Knxwledge, J Dilla, Flying Lotus, DOMi & JD BECK, Keeth, Owen, Black Country New Road, Jane Remover, Glaive, kmoe, Tricot, my hair is bad, Hitomi Tohyama, Happy End, Asap Rocky, Takashi Kokubo, and so so much more across all of these inspirations that I will get more into later.

I named it "Corazón" not only as a reference to the aforementioned immaculate heart of Mary but also because of the idea of giving your heart completely to someone. This album is my entire heart. I did the album cover, the liner notes, the lyrics, the music, everything. It may not be good lmaoo but every piece of me poured into this project belongs to her and I liked playing with the concept of basically creating a sonic/visual manifestation of how I feel and then presenting it to her as if physically giving her my heart. I remember writing songs for my ex back in high school and not really posting it anywhere, opting to just send it to her instead. Those demos were terrible but I liked that it was like a secret just between me and her. So this album should feel like that. A diary entry and a love letter. A chapter in a storybook. I met this person on a porch on a summer day and it was like lightning struck me. I was completely enveloped. I'm sorry, I know this is probably toxic and it's all projection but I want to live as authentically as I can for the brief moment in time that I'm on Earth.

Honestly I don't even know if I want her to ever read this or respond to it because the truth is I have nothing. I have nothing to offer her..The only things I have are love and music. So I hope you like it, Black Cat, porque tienes mi corazón ♡ 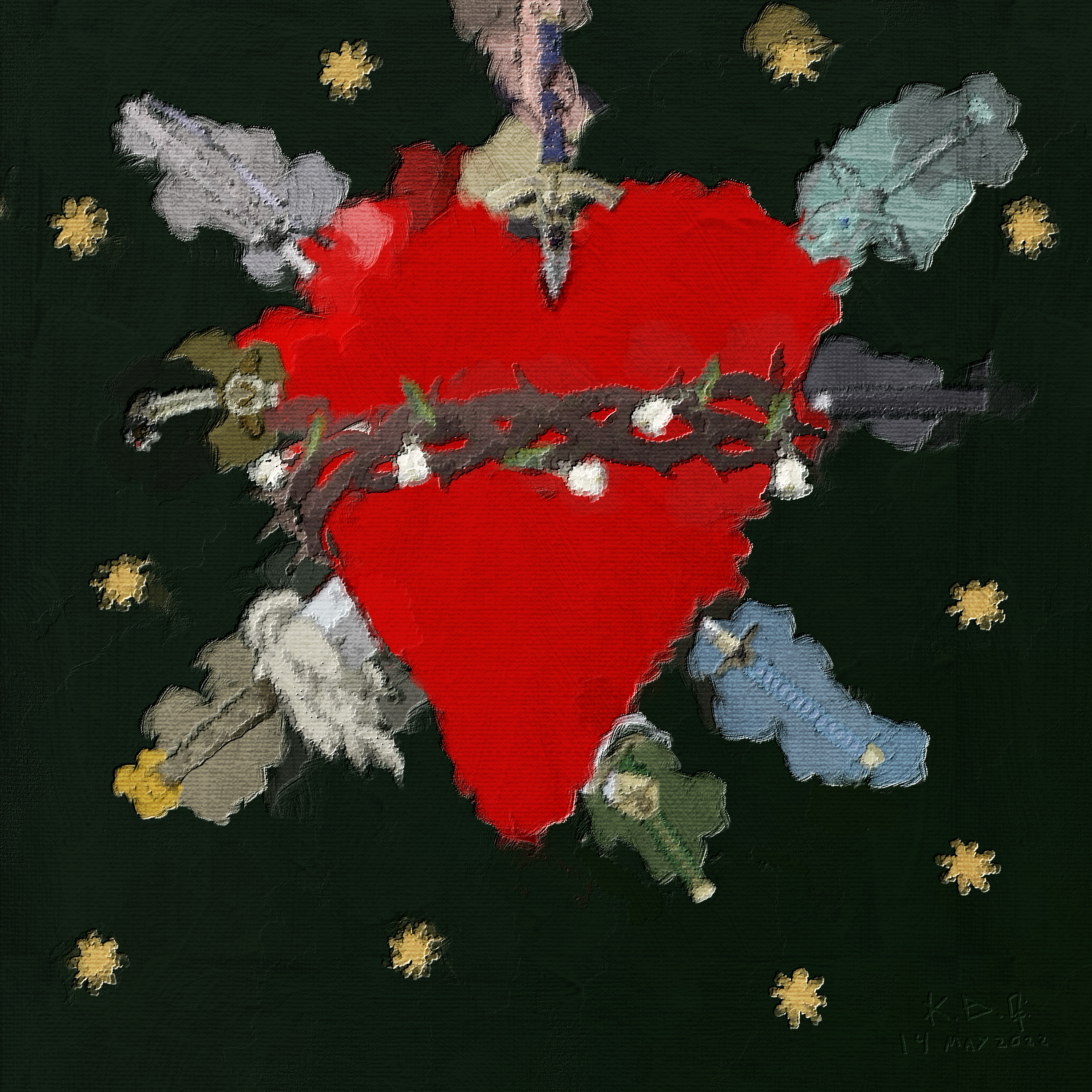